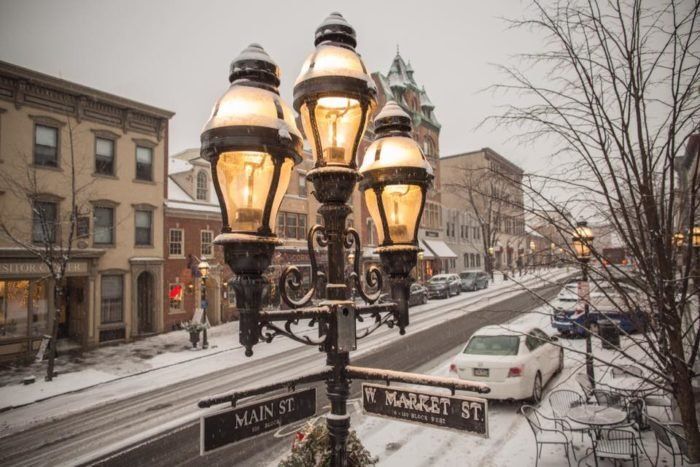 Making the Most out of Your Street Lights

Downtown streetlights have historically had a singular purpose; light our streets and make residents feel safe. 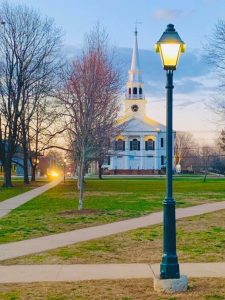 But what if lights could deliver more than lighting? Today’s forward thinking planners and managers believe they can and should. Streetlight poles can provide both a signature aesthetic and a growing list of functional deliverables.

When considering poles and street lights for a downtown project, the design and decision making team should dive deep into the potential needs and wants of their community. Aesthetics is typically always at the top of the concern list and establishing a municipal signature standard is paramount. Perhaps a town is considered a historic location and wants retain an old world feel. Other towns may be creating an ultra-contemporary center and want lighting that reflects that vision.

For some projects, something as simple as the aesthetic addition of an unusual color or adding small decorative components may be all a streetscape needs to give that unique element. One must also consider the appearance, the signature, and the statement that a downtown center wishes to make. By following the old adage of “keep things simple”, cities and towns may have a way to use their street lighting as the town’s statement piece and signature style – and one that does not come with a significant increase in cost. 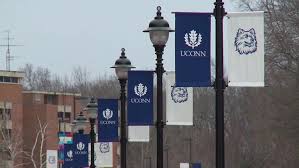 The University of Connecticut is a perfect example that showcases the impact of both a custom finial and dual banner arms to add both identification and character to the campus landscape. It is often over-looked how transformative and impactful something a small as changing a finial can be. Municipal street lighting invites thinking beyond one-size-fits-all options.

Given that style and function matter in equal measure, municipal designers would do well to challenge themselves by avoiding standard selections out of a product catalog. 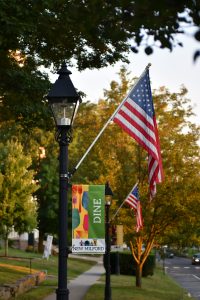 Street lighting is something that invites creativity, including but not limited to, overall style, color, or decor and functional accessories.

Hanging flower pot brackets, way-finding signage, flag banner brackets are a few functional and simple options that bring character and add an element of attractiveness to any streetscape. Banner brackets create a sense of community and are a lively colorful visual addition. Electrical outlets located discreetly at the top of posts make holiday displays a simple installation and provide a clean appearance.

Function jumps to an entirely new level when municipalities begin the journey to create unique placemaking locations for city residents. Placemaking is about community, a warm feeling and designing a destination. Unusual, yet functional, streetlight options are a natural fit in this space. A designer can add discreet speakers for broadcasting music by local musicians. An electrical outlet can also be installed at the bottom of the post so street vendors have easy access to power. A sense of community can also be an important part of building a successful downtown space. Many towns struggle with fundraising for their downtown improvement or revitalization project. One common fundraising tactic is selling dedication bricks that become a statement and a reminder of the community members that come together in the name of beautification and community. The exact same fundraising method can be done with street lights, except instead of bricks, the poles can be donned with dedication plaques. 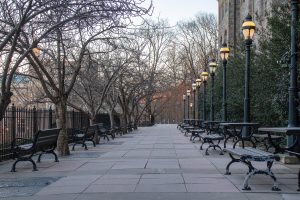 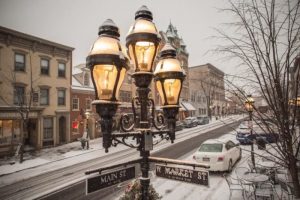 In recent years, the conversations have been building around developing lighting installations to include SMART technologies. By utilizing the existing real estate of light fixtures and poles, these types of technologies have aided cities both large and small in regard to infrastructure, transportation, safety, and even economic development. Today, it is common to see cameras incorporated into local street lights. Depending on the class and style, these cameras are able to monitor and collect a wide array of information including, but not limited to, facial recognition information, car and pedestrian counters, and even dangerous object detection. WiFi is more often than not required for lighting projects that include video surveillance, but that brings us to another technology that is embedded within streetlights and poles these days. WiFi access is becoming increasingly popular in public spaces, so why wouldn’t we expect to see it coming to more downtown areas?

This is a valuable and requested resource by many residents of cities, regardless of size, and is also a benefit to local businesses who can utilize that access for advertising and increasing foot traffic at brick-and-mortar stores. 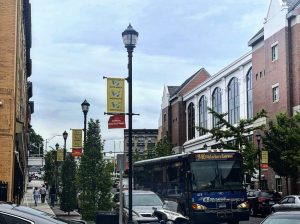 Yes, many of these SMART technologies may be considered “too much” for a small town but there are other technologies and solutions that do not break the bank and still provide a range of possibilities.

It may not be an initial thought most would have, but the incorporation of speakers to a street light allows for both communication and community. Take the city of Waterbury, Connecticut for instance and their inclusion of speakers to their new light fixtures and poles. The city now has an alternative way that local businesses are able advertise in between ambient music being streamed daily along a downtown street. It also serves as an alert system for the area. Speakers are multi-purpose but above all assist in creating the type of environment that people really want to be in. While these advancements open up a world of possibilities and invaluable information to city officials, not all of these types of add-ons are always initially financially feasible. Municipalities would be advised to request “future-proofing” so that if, and when, funds are available, the streetlight can become SMART without costly fixture removal and reinstallation.

The possibilities are all there and can almost be considered endless when it comes to designing the street lighting element of a placemaking project. The key to it is having a creative and malleable team of engineers, designers, and decision makers who value the importance of creating the type of downtown spaces where residents and visitors alike truly want to be and want to keep coming back.

Since 1877, Penn Globe has been America’s premier outdoor lighting company. Today, we enjoy working with the best customers, our cities, towns, colleges and universities each of whom entrust Penn Globe with their vision. Penn Globe is dedicated to honoring our history while focusing on future lighting innovations. Our talented and progressive team is passionate about authentic outdoor lighting individually designed for each customer, all with energy saving and sustainable features, manufactured to exacting customer specifications.